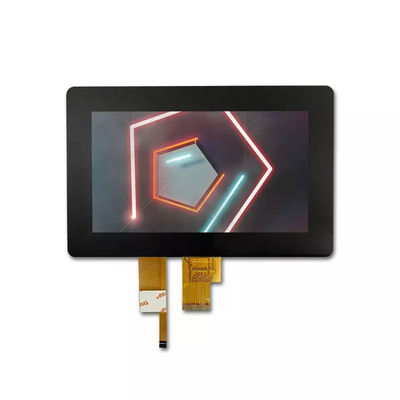 devices. This product is composed of a TFT LCD panel, a drive IC, a FPC, and a LED-backlight unit. The active display area is 7.0 inches diagonally measured and the native resolution is 1024*RGB*600.Features of this product are listed in the following table.

1.About Image Sticking
1.1 What is Image Sticking?
If you remain a fixed image on LCD Display for a long period of time, you may experience a phenomenon called Image Sticking. Image Sticking - sometimes also called "image retention" or "ghosting"- is a phenomenon where a faint outline of a previously displayed image remains visible on the screen when the image is changed It can occur at variable levels of intensity depending on the specific image makeup, as well as the amount of time the core image elements are allowed to remain unchanged on the screen. In POS applications, for example, a button menu which remains fixed, or in which the " frame "

elements (core image) remain fixed and the buttons may change, may be susceptible to image sticking. It is important to note that if the screen is used exclusively for this application, the user may never notice this phenomenon since the screen never displays other content. 'It is only when an image other than the *retained" image is shown on the screen that this issue becomes evident. Image sticking is different that the * burn-in" effect commonly associated with phosphor based devices.

Image sticking is an intrinsic behavior of LCD displays due to the susceptibility to polarization of the interior materials (liquid crystals) when used under static, charged conditions (continuously displaying the same image). The individual liquid crystals in an LCD panel have unique electrical properties. Displaying a fixed pattern - such as the POS menu described above over prolonged periods can cause a parasitic charge build-up (polarization) within the liquid crystals which affects the crystals' optical properties and ultimately prevents the liquid crystal from returning to its normal, relaxed state when the pattern is finally changed. This effect takes place at a cellular level within the LCD, and the effect can cause charged crystal alignment at the bottom or top of a crystal cell in the "z" axis, or even crystal migration to the edges of a cell, again based on their polarity. These conditions can cause image sticking over an entire area, or at boundaries of distinct color change respectively. In either case, when the liquid crystals in the pixels and sub-pixels utilized to display the static image are polarized such that they can not return fully to their

" relaxed" state upon deactivation, the result is a faint, visible, retained image on the panel upon presentation of a new, different image. The actual rate of image retention depends on variation factors such as the specific image, how long it is displayed unchanged, the temperature within the panel and even the specific panel brand due to manufacturing differences amongst panel manufacturers

1.3 How to Avoid Image Sticking?

- Try not to operate the LCD with a " fixed" image on the screen for more than 2 hours.

A below, image stick can occur in as little as 30 minutes. Adjust your screen saver settings accordingly.

- Power down the unit during prolonged periods of inactivity such as the hours a store is closed or a shin during which the piece of equipment isn't used.

- Use a screensaver with a black or medium gray background that is automatically set to come on if the device is inactive for more than 5-10 minutes.

- Avoid placing the monitor in poorly ventilated areas or in areas that will create excess heat around the monitor for software developers.

- In defining the icons, buttons, or windows in the screen, try to utilize block patterns instead of distinct lines as borders for dividing the display into distinct areas. If it is necessary to display a static image, try to use colors that are symmetric to the middle grey level at the boundary of two different colors, and slightly shift the borders line once in a while

- Try to utilize medium gray hues for those areas that will have prolonged display times or remain static as other menu elements change.

1.4 How to Fix the Image Sticking?

Unlike the usually irreversible " burn-in" effects commonly associated with direct view phosphor display devices such as CRTs, an image retained on an LCD display can be reversed often to a point of total invisibility. However,the severity of the underlying causes (as described above) of the image retained on a specific display, as well as the variation factors (see "For Software Developers" above) under which the retained image was created, will dictate the final level of retention reversal, One way to erase a retained image

on a panel is to run the screen (monitor “on”) in an " all black pattern for 4-6 hours. It is also helpful to do this in an elevated temperature environment of approximately 35° to 50° C. Again, utilizing a dynamic screen saver with an all black background during prolonged

Image sticking is a phenomenon inherent to LCD Display technology itself, and as such, the occurrence of this "ghosting effect is considered normal operation by the manufacturers of the LCD display modules which are integrated into today's monitor solutions. TSD does not warrant any display against the occurrence of image sticking

We strongly advise that you follow the operating recommendations listed above to avoid the occurrence of this Phenomenon.

Q: How can i find the right product?
A: Please send us your requirements, we will recommend our standard products, if it’s not fit, we will do the necessary adjustment & customization.

Q: What are the payment terms?
A: We usually accept T/T, Paypal, other terms to be negotiated.

Q: What’s the lead time?
A: Usually 3~5 days for sample orders if goods are in stock, and 4~5 weeks for mass production (basing on the quantity and product)